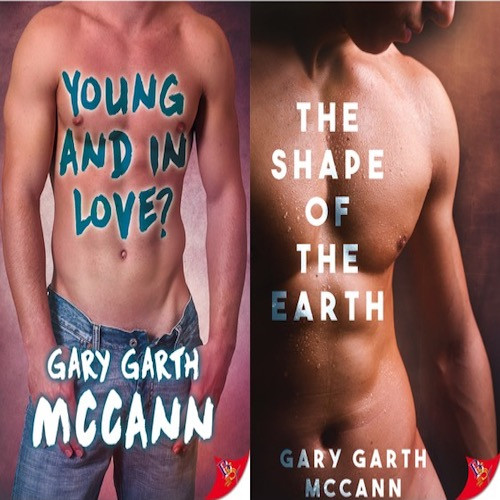 When did you decide to start writing?

In law school in the mid ’70s I began a novel, probably as a distraction from studying. I expect to finish it yet. For many years I was busy being a law librarian and didn’t write fiction, but my fifty-year-old partial manuscript inspired the 2011 story “The Yearbook,” in Mobius, A Journal of Social Change. So, in a way, I began writing fiction in the mid ’70s.

In the late ’80s, Washington’s respected Sagalyn agency thought they could sell a short crime novel I penned. As I now know, agents try to sell many more manuscripts than they’re able.

The heartbreaking Gore-Bush election inspired me to write the first of three stories about the main characters in my novel The Shape of the Earth. That story, “A Double Bed,” appears in the Harrington Gay Men’s Fiction Quarterly, along with your “Anything for a Dollar.” After it, I’ve written almost without a hiatus.

What books and writers do you admire and consider influences?

My writing is eclectic. I hope my prose style, and the gay themes or subtexts, along with my interest in sex will provide enough of a brand for me. I look toward Jane Smiley as one writer who has written a variety of genres: a crime novel, a humorous novel, a novel inspired by a classic, and several character study novels and novellas.

I’m particularly in awe of literary character study with a sense of humor. In postwar England, Barbara Pym wrote it. Anne Tyler substituted quirkiness for humor and also became a master of writing novels that give no hint as to where they’re going and, at the end, leave the reader wondering, “Where has she dropped me?” I love those two qualities in fiction, keeping the reader guessing as to where the novel’s going, and making the reader think about the ending after reading it. Pym and, especially, Tyler inspire me to try writing books of their style but with gay men in mind. I’ve always been so sex-obsessed that it’s easy to slip into the erotic, consequently along came Hardy of Young and in Love? I’m thrilled one Goodreads reviewer, a stranger to me, gave it five stars and said, “The story is not the plot, it’s the actual characters themselves,” and “The story doesn't have a traditional beginning and it definitely does not have a traditional end…The book simply ends, we have to look back, think for 30 seconds, and then see how logical the ending really [is].”

Young and in Love? is also inspired by one of my favorite novellas, Truman Capote’s Breakfast at Tiffany’s, another brief character study that doesn’t completely wrap up. In the novella, as opposed to the film, the last the reader knows of Holiday Golightly is a report, years later, of someone spotting in Africa a woman who might have been her.

Richard Russo’s humorous Straight Man is also among my favorite works of fiction, as are Tom Perrotta’s Joe College and Jane Smiley’s Good Faith, in which she writes first-person male. I’m capable of falling in love with male protagonists, straight or gay, and Smiley’s midlife Realtor, Joe, wins my heart for his vulnerability in work and with women, as well as for describing his irrepressible erection when one girlfriend introduces him to cocaine.

The fiction I try to emulate expresses what is or was, not what should be (unless it’s explicitly utopian). I’m put off if an author panders to readers by idealizing characters. Christopher Isherwood’s gay widower in A Single Man is neither hero nor villain. Andrew Holleran’s protagonists are ordinary gay men. Edmund White’s have moments when they’re far less than heroic. I can’t imagine ever writing a character who isn’t as flawed as he is heroic. Most of us have a better estimation of ourselves than the facts merit, in my opinion. In my fiction I want people to see characters as flawed as we ourselves are. I imagine this gives my writing its noir tint.

For me, an author never provides what some editors call “too much information.” In Walker Percy’s The Moviegoer the protagonist cuts short a conversation with a young woman on the steps of the library because he needs to move his bowels. In Saturday Ian McEwan’s protagonist sits down on the toilet to urinate during the night, tired of standing. I love these organic details.

Grisham’s The Client took me back to my post-law-school years and inspired me to create my own young lawyer innocently getting into deeper and deeper trouble. While writing The Man Who Asked to Be Killed, I read Robert Penn Warren’s 1946 All the King’s Men. Like my protagonist, Jack Burden is confidant to a governor who blurs right and wrong and is fated for disaster. Warren’s Pulitzer-prize winner clearly, intentionally, influenced my book. Dashiell Hammett also must have influenced it, because I kill off a lot of characters. Three years after its publication, one Amazon reviewer wrote that she “enjoyed every page.” I was more than pleased. Above all, I want to write fiction that readers don’t skim. Of course, what I skim in a novel, others may devour; what they devour, I may skim. My husband and I belong to a short story discussion group. I recall us agreeing on the way to it that one story we’d just read was as bad as stories get. “Isn’t that the best story ever?” a friend gushed as we arrived.

You've written a variety of different styles. Why gay erotica?

The Shape of the Earth is a character study, as is the novella Young and in Love? But The Shape of the Earth is inspired by hard-boiled crime, with sex substituted for crime. Both works focus on their protagonists’ sex lives. If these books focused on their protagonists’ struggles to pilot a plane or to sing opera or such, they’d be classed as gay fiction or literary fiction. Because they focus on sex, they’re “erotica.”

Sex is at the heart of the relationships the protagonists in Young and in Love? and The Shape of the Earth struggle to establish or maintain. Sex is the difference between being friends or lovers or boyfriends or husbands. What the characters think during sex and how they behave in bed reflects what they believe being a man means, physically and psychically, and how masculinity feels at its most intense, and how they use their visceral maleness for or against one another. Sex is a lens for viewing what they achieve with their manhood.

Do you think there's a difference between erotica and pornography?

Authors
Young and In Love?