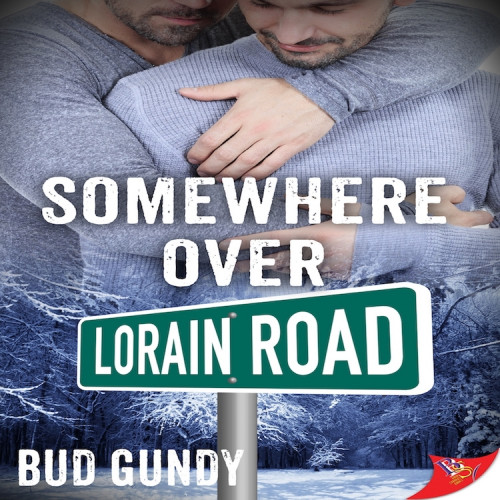 I had the pleasure of interviewing Bud Gundy, a newbie to Bold Strokes Books, about his February release, Somewhere Over Lorain Road. I was immediately taken with the book that features Don Esker, a middle-aged man who returns home to help with his dying father. Don soon learns that his father’s final wish is to have his name cleared in a murder mystery that happened in the 70s. Technically, Mr. Esker had been cleared of any wrongdoing by the police, but public opinion told a much different story.

As a writer who lives in and writes about Ohio, I was taken with Bud’s descriptions and use of Ohio as a setting. I wanted to talk to him more about how place can become its own character in a novel. I’ve always seen Ohio as a ripe setting for crime novels because of the stark juxtapositions of rural and urban areas so close to one another. For Somewhere Over Lorain Road, Bud said he never considered any other setting than the fictitious town of North Homestead, a suburb of Cleveland. “I grew up in Ohio, and I know that world really well,” Bud said. “There aren’t a lot of books set in Ohio. I thought that was interesting.” A longtime resident of San Francisco, Bud said it’s easy to forget the beauty of the Ohio landscape and its gorgeous scenery. However, as Bud pointed out, “it’s important to be honest,” about the realities of life in Ohio. The heroin/opioid addiction crisis and areas of poverty can’t be ignored, even in a novel that is partly set in the 1970s. The Esker family knows the pain and cost of heroin addiction well.

Don Esker leaves after high school and rarely returns home until his father falls ill. As a teen, he was bullied because of his sexuality, a situation compounded by being a student at an all-boys Catholic school. He also suffered under the accusations that his father was responsible for the murders of young boys in the area. However, the North Homestead that Don returns to as a man is a much different place than it was in the 70s. “He’s moved on,” Bud explains, “and it’s not the same.” Indeed, Don soon meets Bruce, an honest relationship that Don couldn’t imagine happening for him in North Homestead.

Long-held questions about the crimes are answered and justice is finally delivered in Somewhere Over Lorain Road—a satisfying end to a well-told story.

Bud took some additional time to answer a few more questions through email.

What inspired you to write this novel?

Mostly, I wanted to tell a story that examined forgiveness. One scene in particular kicked around in my head for years, and I was glad to finally write it. I’m an atheist, but I think in our rush to secularism we are neglecting some important concepts simply because they smack of religion. Forgiveness is very powerful, and people often overlook it for the wrong reasons.

Who is your favorite character in the book and why?

Bruce—the romantic interest. He’s based on my boyfriend, a very stoical, logical, math, science, get-to-work, and no BS kind of guy. Bruce’s manliest trait is that he’s not cowed by expectations for men, especially a lack of feelings. Bruce is at his most masculine when he’s straightforward enough to say, “I’m really hurt by the way you’re treating me.”

What was the best part of writing this book? Your least favorite part?

My favorite was using the dramatic seasonal changes of the Midwest to set moods. My least favorite was the universal homophobia of the past, but I felt it was critical to be honest about that time and how I experienced it.

Who are some LGBTQ authors who have inspired you? What are some of your favorite books?

Paul Monette’s Borrowed Time and Becoming a Man were enormously influential for me at a crucial time in my life. Randy Shilts is also one of my writing heroes. I would have liked to meet them. And I have a library stuffed with favorite books, but every few years I reread In Cold Blood and Pride and Prejudice. I don’t know how many times I’ve read them.

What advice do you have for other writers hoping to eventually publish?

The most important advice is to tell a well-written, interesting story because nothing will happen until you do. To expand a bit, I’ve seen any number of beginning writers neglect their plot in favor of scenery or a dramatic historical period. But Gone with the Wind is about a love triangle, not the Civil War. Tell us what your main character wants and show us how he or she strives to achieve it and your setting will come to life. Also, listen to criticism with an open mind and don’t take it personally. I neglected my slide into passive voice and slovenly writing for too many years before I realized that I would never get published until I worked harder, no matter how many people told me I was a good writer.

What is next for you? Do you have any events coming up where readers will get a chance to meet you?

Several years ago, I wrote a novel called Elf Gift, which I envisioned as the first of a trilogy that told a bigger story that seems supernatural. The title was a mistake because many people think it is a fantasy, but it has nothing to do with elves—there’s not an elf in sight! The sequel never worked because the major reveals about the characters already happened in the first book. I finally hit on the idea of following the David Mitchell route—use the same phenomena but from wildly different angles, sometimes using the same characters but always telling a new, stand-alone story. It works really well for my overarching plot because the major secret hasn’t been revealed, and there’s a ton to explore. So that’s the idea behind my new novel, I, Claudia, which follows a man uncovering his grandmother’s secrets, and by extension his own.

I’ll be doing a reading and signing for Somewhere Over Lorain Road at Dog Eared Books at 489 Castro Street in San Francisco on Sunday, March 11 at 5pm. I’m working with some friends to set up a similar event in Cleveland, probably sometime in April.