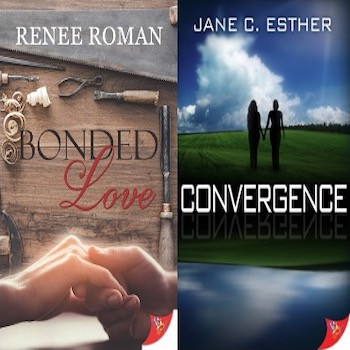 Hello readers!  Jane C. Esther and Renee Roman here, romance authors and upstate New Yorkers (at heart, for Jane). There’s a lot going on in the world right now. Things we can’t control, and things we can. We fully support the Black Lives Matter movement and urge all of our readers, fans, and friends with privilege to donate money, time, or yourself to help achieve racial justice and equity for all oppressed populations, especially Black Americans.

We also know you can use a bit of distraction. That’s why we want to tell you a little about our books, and then answer some questions from a Random Question Generator. This should be interesting…

Jane Esther: Renee, would you tell us about your new book?

Renee Roman: Sure! Bonded Love is a contemporary romance, set in upstate NY. Blaze Carter is a master carpenter who would one day like to pass her legacy on to her children. Trinity Greene is an RN in the emergency department and studying for her master’s degree, determined to make something of her life and remove her family’s stigma of never amounting to anything. When an accident leaves Blaze with a possibly life-changing injury, her once certain future begins to fade, though there is a bright spot…meeting the beautiful, sexy, spitfire, Trinity. Can what both women once thought was a planned future become something more with the possibility of love?

I’ve been working with this story and these characters for over a decade and am so glad I’m finally able to share them with readers.

RR: Jane, give us some information about your new release, Convergence.

My book, Convergence, is also set (partly) in upstate NY. It’s the sequel to Uninvited, and readers will definitely get a lot more out of it if they read Uninvited first. The two-book saga follows Aerin McLeary and Olivia Ando, former girlfriends who reunite when Aerin becomes infected with alien energy and needs Olivia’s expert help. The first book follows the two women as they begin to heal the wounds of their former relationship and try to figure out what’s going on with Aerin.

Here is the succinct description of Convergence: After surviving a harrowing explosion in Seneca Lake, Olivia Ando and Aerin McLeary return to Indiana with more questions than answers. While Olivia revels in their newfound love, finally having everything she’s wanted since high school, Aerin begins to build a life for herself outside of her small hometown.

But all is not as it seems.

By chance, Olivia discovers that Aerin has plans for a machine that will open the portal in the lake and channel alien energy to Earth, a revelation that exposes an even greater and unforgivable betrayal. With the world on the precipice of a monumental invasion, Olivia must choose between protecting her heart and trusting that Aerin has lied for a greater good. With life as they know it at stake, will their love survive the inception of a new world?

RR: Wow! I’m not a huge sci-fi reader, but that sounds really interesting. I’m going to have to search out Uninvited from my huge to-read library.

JE: Now we get to the good stuff: weird questions. Renee, what would you do if you fell deeply in love with someone on the internet, only to discover that it was a government-created AI that escaped?

RR: After the initial heartbreak, I’d have to ask “Why me?” Then I’d have to ask how had I not realized the person I’d fallen for wasn’t human? What did that say about me and how open are my eyes to the world I live in? Definitely a reason to step back, take a breath, and really look inside.

JE: Yeah. If it was a really good AI, you might never know unless you tried to meet them. It would certainly be eye-opening in terms of who ELSE you might be friends with who’s actually an AI!

RR: What’s the biggest personal change you’ve ever made?

JE: Well, this is embarrassing, but for a long time, I lived in the Happy Valley, aka Western Massachusetts. I loved it there. While racism and classism were extremely rampant (though on the surface, hidden), there was an air of peace, or at least being able to strive toward peace. Lots of well-meaning, mostly white folks who like to have a good time and truly love and accept their neighbors lived where I did. There’s also a lot of personal betterment. Spirituality, crystals, reiki, you name it! In my mid-late-twenties, I was really searching for meaning in my life. I got involved with Buddhism and clean eating and acupuncture. At one point, I even went to a raw food workshop given by a woman who had practically starved herself by following that diet. Now, there’s a lot to be said for religion (if done correctly) and positive vibes. But for someone who relied on scientific evidence to prove or disprove things up to that point, and for a burgeoning librarian, this was not going to work. When I met my wife at the beginning of library school, she brought me back into reality. I gradually stopped using a bar of salt as deodorant and watching/believing Ancient Aliens. It was a big change, and I think it shows that with the right influence, anybody can change their views and habits.

JE: What were you completely certain of until you found out you were wrong?

RR: Well, these questions aren’t hard at all. LOL…On a serious note, I’d have to say the long-standing belief that everyone has an ulterior motive behind what they do or say. Don’t misinterpret my meaning. There are still a lot of well-meaning people in the world and I am happy I’ve had a chance to meet them on a regular basis. People who are genuinely good, kind, and interested. People who care if I’m having a shitty day, or who ask if there’s anything they can do to help with this or that, and it’s not just rote. It’s real. Learning that lesson took about fifty years, but I’m here and so glad I don’t look to find the falsehood behind a person’s words or actions anymore. I’m much more in tune with being an optimist than a pessimist.

JE: I’m so glad you said this. I think that being from upstate NY, the culture tends to be more helpful and more open/friendly than other places (Boston, ahem). I feel out of my element in sort of the opposite way where I live, although perhaps I’m just still learning this lesson too! From what I know about you (not nearly enough, Renee!), I think you’re the type of person who actually means it when they offer help or wants to know what kind of day you had. I’m glad for that.

RR: If you were offered the position of mayor of your city, would you take it?

JE: Yes, 100%, I would be honored to be Ben Wyatt, Jr. I’d have no idea what I was doing, but I’m pretty good at figuring things out. And I’d absolutely surround myself with people who are knowledgeable about our city. It would also give my town the chance to do some progressive things, like extra funding for the library and education and much less for the police force. I’m going to be honest, I have briefly thought about someday running for public office in my town.

JE: An epic feast is held in your honor. What’s on the table? And as a follow-up, what’s the occasion?

RR: More like, what isn’t! I’m willing to try many foods, but my favorites include everything Mexican, Thai, and American. There several things I would definitely remove (I try not to waste food) including okra and lima beans (I’m a texture-driven eater…he-he) and neither cut it. I’m also not into organ food, though I do love properly prepared liver.

Hmm…the occasion is one of my books hitting The New York Times best sellers list, of course!

JE: I love it! I’ll be there and take your extra okra!

RR: You can have it all!

RR: What movie can you watch over and over without ever getting tired of?

JE: My all-time favorite movie is Drop Dead Gorgeous. My sisters and I saw it (accidently) when it first came out, and we’ve been quoting it ever since. It has lots of my favorite actors, and if you come up to me and quote it, I will be your best friend.

RR: I’m not sure I know that one. Now I’m going to have to check it out!

RR: Is this a question to get me to tell you how old I am?

RR: Uh-huh. LOL…it’s fine either way. Being in my wisdom of sixty years, I don’t mind sharing at all. Back in my day…I’d have to say I survived very well without a cell phone. I liked having to be still while having a conversation with someone. I liked being face-to-face and seeing the reaction of the person I was talking to by watching the expression on their face, or in their body language (unintentional plug for my next novel), or making physical contact. To me, this generation is lacking some social skills and the ability to read a person. To know what they’re thinking even if it doesn’t match what they’re saying. It’s a lost art and I hope it returns.

RR: When did something start out badly for you but in the end, it was great?

JE: I’m going to go with the time my wife and I adopted a dog from the Cayman Islands. We were there on vacation, and we went to see if we could take a dog out from the shelter. Well, we fell in love with said dog and immediately started the adoption process. We had a dog back home and felt like she was maybe at a point where she could tolerate another dog friend (spoiler alert, she had a brain tumor and that’s what was changing her behavior to be nicer to other dogs). A few weeks later, we drove to NYC to pick up Miley, our new Cayman baby (nine years old). Well, first introductions went terribly, as did the rest of them. They HATED each other. Zooey was not in any kind of mood to let another old lady dog be in her house. Lots of barking, shouting, stress, and bleeding hands later, I found the perfect foster situation for Miley. Three roommates, one of whom I worked with, took her for a few months. One of them eventually adopted her, so Miley was able to go to a loving home, even though the process took many stressful months!

RR: Oh, that does sound stressful. So glad everything worked out.

JE: Renee, if your childhood had a smell, what would it be?

RR: That’s an interesting question. I’d have to go with the Christmas season. The evergreen tree, my grandmother baking, a house full of relatives. Those are some of my fondest memories. And snow. I remember being so sick during a big snowstorm and upset I couldn’t go out and play in it. My middle brother, Joe, got a couple of his buddies and built a huge snowman in the backyard while I watched out the window. It remains one of my fondest memories.

RR: What criminal charge would you like to be immune to?

JE: I’d have to go with Punching White Supremacists.

Thanks for reading, and we hope you had as much fun as we did asking each other random questions!