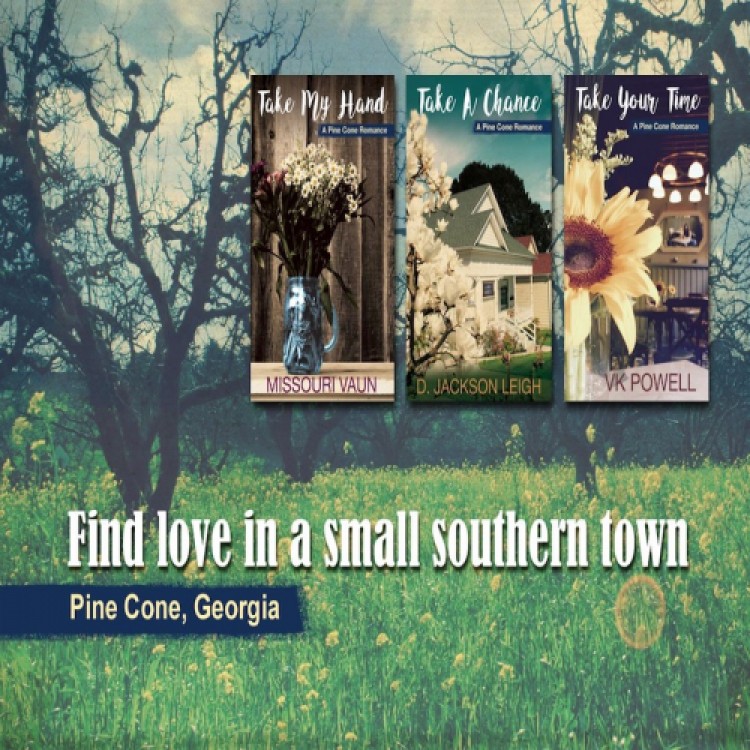 Missouri Vaun, D. Jackson Leigh, and VK Powell are beyond excited to announce the birth of three pine cones. To be more precise, a trilogy of novels about three lifelong friends finding love in their small hometown of Pine Cone.

So if you grow to love the Pine Cone characters in Missouri Vaun’s Take My Hand, you’ll see them all again in D. Jackson Leigh’s Take a Chance and in VK Powell’s Take Your Time. Set in the rich fabric of the South, the stories explore the strong bond of friendship between mechanic/artist Clay Cahill, veterinarian Dr. Trip Beaumont, and Deputy Sgt. Grace Booker as each navigates her path to love. How did we come up with the idea of this collaboration? Glad you asked.

Three writers walked into a bar…

Vaun: That wasn’t a bar, it was my house.

VK: She’s right. It started at her house on a rainy Friday afternoon sitting around a fire.

Jackson: It really started with a bottle of Defiant whiskey I brought from North Carolina, to celebrate the launch of Missy’s newest book.

Jackson: (frowning) What were you drinking?

VK: I don’t remember. I think I was the designated driver.

Vaun: We were sitting on the couch, not in a car. I’m pretty sure you were drinking with us.

VK: If you say so. But, actually, we were in three chairs in front of Vaun’s fire.

Jackson: Doesn’t matter. I’m writing this blog, so it’s my recollection of how it happened.

VK: This should be good. You were having trouble with your back and seemed to think it was two-for-one night. Vaun poured you two drinks for every one she poured herself.

Vaun: More like three to my one. I’m a notorious lightweight.

Jackson: ANYWAY, Vaun was kicking around the idea of a sequel to Whiskey Sunrise and VK said, “Hey, we could each write a novella and package them together.” We starting tossing out title ideas. I was gonna write Bourbon Sunset. VK’s title was Vodka Nooner. It was really fun. But who suggested that we send it to Sandy as a joke submission?

Vaun: Uh, I think I did because Sandy had floated the idea, possibly jokingly, that while we were all together we should think about doing a trilogy. But I blame the whiskey for any poor choices I may have made.

Jackson: We all figured we’d get a sarcastic answer like, “Sorry. That dog just don’t hunt,” have a good laugh, and that’d be the end of it.

Vaun: Except that sounds more like something you’d say, Jackson.

VK: (laughs) Sandy is an Aussie living in upstate New York. She probably doesn’t know what that Southern expression means.

Vaun: She’s an Aussie? I thought she was a librarian.

Jackson: (laughing loudly) That’s a good one. (turning to VK) Librarian. Get it? Sandy always says people think her serious look is like an angry librarian.

VK: (rolling her eyes) How long is the blog going to be?

Jackson: (still smiling) Right. We digress. So…what were we talking about?

Vaun: You were going to tell how we got the idea for the Pine Cone Series.

Jackson: Right. Well, Sandy got that we were joking, but emailed back serious suggestions for us. But she wanted full-length novels rather than novellas. We looked at each other and asked, “Can we actually do this?” We took a few elements of Sandy’s suggestions and the ideas began to flow. With similar romantic ideals, senses of humor, and writing styles, we brainstormed a thousand scenarios during that visit to carve out a basic idea. After VK and I returned home, a hundred emails fine-tuned the concept and serious proposals for each book were submitted back to Sandy.

So here’s a little background:

The town of Pine Cone’s beginning was typical during a time when all you needed was a railroad depot, a cotton gin, or a tobacco auction barn to seed the beginnings of a new community. Before you know it, there’s a church, a school, a bank, and a courthouse. And, as certain citizens prosper, a golf course and country club become necessary because, obviously, you can’t hold the debutante ball in the high school gym.

Pine Cone, however, grew to become not so typical.

An itinerant artist came through one day and was instantly enamored with the town’s rural texture, unique characters, and long sunsets. He settled there quietly, but his paintings of the town and citizens brought an uproar of praise when they circulated through big city galleries. More artists came—painters, sculptors, potters—to settle among the farmers and townspeople. The quirky creative types were tolerated with a bless your heart because, well, Southerners are reared to be polite and most every family has a crazy Uncle Earl, demented Aunt Edna, or a cousin who was (admitted only in a whisper) flamingly gay or rumored to be lesbian.

After Interstate 95 paved an East Coast corridor that came within a few miles of the town limits, tourists began to find the artsy enclave an interesting stopover on their way to the sunny beaches of Florida. The bless your heart turned into thank the Lord as the tourists’ money found its way into everybody’s pockets. A downside was that drug mules transporting their illegal products from marinas along the Gulf Coast also found Pine Cone a convenient overnight stop while they waited for their handoff to an I-95 runner traveling between New York City and Miami.

Shaped by that history, the Pine Cone stories are a blend of Southern shenanigans, page-turning intrigue, and sultry romance among everyday people—with a diner at the town’s heart, the Clip ’n Curl styling salon that is gossip central, a mechanic’s garage, a thriving veterinary practice, and a growing police force.

The stories that emerge are:

Art critics raved about the originality of Clay Cahill’s paintings in her first solo show in NYC. But she was unprepared for the psychological pressure that followed and the betrayal of someone she thought cared about her. Clay retreats to her hometown, Pine Cone, Georgia. She takes a job at her grandfather’s garage driving the tow truck and sets her paints aside.

River Hemsworth owns a boutique art gallery in NYC and is busy mounting her next show when she receives a call from a lawyer in Pine Cone. River’s aunt has bequeathed her a local gallery. She arrives in the small town, intent on unloading the property immediately and returning to NYC, but then she wrecks her car and has to be rescued by a broodingly handsome tow truck driver. River is out of place in a town where the locals’ idea of fashion is anything with a Carhartt label. But slowly her perception begins to shift and so does Clay’s. For the first time in months, Clay’s inspired to paint. River has given rise to desires she never thought she’d feel again. And those desires must be expressed on canvas.

Trip Beaumont likes being a big fish in a small pond. There’s hardly an animal she can’t heal or a woman she can’t charm within fifty miles of Pine Cone, Georgia—except for the irritating and elusive new cop who keeps leaving parking tickets on her truck.

Grace Booker’s life is good—but not quite everything she wants. Her job as a county deputy has its challenges, but she enjoys helping people. Her most recent good deed, however, ends badly and Grace is left with a raucous African grey parrot, Dirty Harry, who hates her. When Harry becomes louder and more neurotic, Grace takes him to the new vet, Dr. Dani Wingate, and sparks fly when the woman instantly assumes Grace has been abusive to the bird.

Recently laid off from her dream job as a zoo veterinarian in a large northern city, Dr. Dani Wingate accepts a temporary position in tiny Pine Cone until an opportunity opens up back in the city. The only thing she wants more than a lesbian who can do uncomplicated is a one-way ticket out of Pine Cone.

Coming in June, July, and August of 2018. Mark the dates on your calendar. Three humorous yet very romantic stories about three friends, written by three friends.