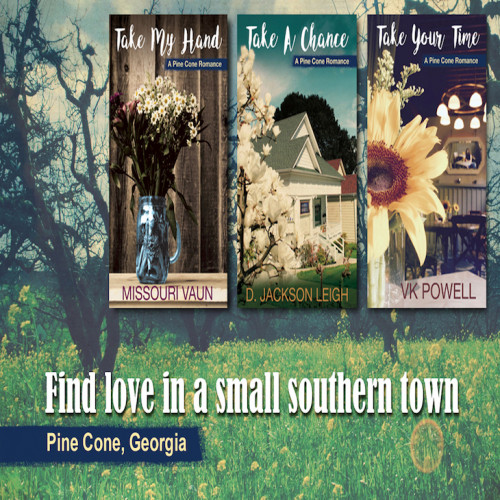 VK: When my friends and sister authors, D. Jackson Leigh and Missouri Vaun, and I discussed the possibility of writing a book (or books) together, we had no idea what we were getting into (“Congratulations, It’s Triplets!”). But the idea appealed to me on several levels. First, it was an opportunity to work with two women I admire as writers and love and respect as friends. Second, it was chance to write about being raised in the South and to share some of the eccentricities that made my life unique and enjoyable. And finally, I wanted to honor my feisty redheaded mother who made childhood anything but boring. So with those things in mind, I set off with my pals down the road to Pine Cone, Georgia.

Now that the three books are reality, we decided to share some things that have happened since the inception of the idea.

VK: Vaun, the idea for this blog came from someone who reviewed your book. Can you tell us about that?

Vaun: After Take My Hand came out, someone shared their Goodreads review on Twitter. In the review they said they enjoyed the book, but they found it hard to believe things that happened in the novel would ever happen in real life in the South. Basically, she went on to say that she didn’t believe people in the South would be so accepting of a gay couple. It was hard not to jump in and comment. Stereotyping any region of our country bothers me. And it made me want to share this experience with the reader.

My wife and I were visiting with my folks in rural north Georgia when DOMA went down. We were at a party with a bunch of my parents’ friends and not really sure what to expect. And then one by one, these people, who were all in their seventies and eighties, told us how happy they were with the ruling. A couple of them even asked if they could share my celebratory post from Facebook.

Jackson: Yeah, I really hate how people are quick to paint the Southern states with a broad brush as being backward and more prejudiced than the rest of the nation. Many times, I’ve been astounded at some of the ridiculous misperceptions. The first time I crossed the Mason-Dixon line other than to change planes, it was to visit a friend who’d moved to Philadelphia with a woman she’d met. My friend and her girlfriend took me to a party where a group of women actually asked me if I’d ever eaten pizza.

I live in the Triangle metro area—comprised of Raleigh, Durham, and Chapel Hill—which is constantly recognized as one of the most educated metro areas in the United States. The Triangle is home to three major universities (UNC-Chapel Hill, Duke University, and NC State University), three Historically Black Colleges/Universities, and two smaller private colleges.

VK: Many folks can’t imagine growing up and/or living in an area perceived by some as socially depressed and full of negative stereotypes, but it’s probably not that different from other parts of the country…with the exception of the accents and some of our colorful characters. I believe compassion and acceptance are more products of upbringing, mirroring appropriate behavior, and education than where we’re born or live. I’ve experienced some amazing examples of acceptance in the South recently that give me hope during a time when we could all use a little more.

Vaun: You mentioned one of those recent experiences to us over the phone.

VK: Yes, the other day, I was chatting with an eighty-five-year-old woman (she told me her age; we don’t ask in the South) in my ophthalmologist’s waiting room about a legislative bill to ban gays from adopting children. In case you’re wondering, she was against it because she knows a gay couple who raised two boys into fine young men.

Vaun: I think given our country’s current political situation, it’s tempting to paint large rural swaths of our country, not just the South, as narrow-minded, but I’m continually surprised by the openness of people…of all ages and demographics.

Jackson: I agree. Way before the big push for same-sex marriage, my partner (at the time) and I, as well as a close friend and her partner, were looking for farmland to keep horses. My friend came across seventy acres that were insanely cheap. The grandchildren of the original owners couldn’t develop the land because the surrounding neighbors had bought up the land surrounding it to keep the hard-drinking heirs from moving onto the property. The neighbors, however, were quick to agree they would sell access to us if we bought the property.

The final hurdle was to negotiate with the heirs, who wanted us to attend their Labor Day cookout, so they could meet us. After weeks of worry and much discussion, we decided only two of us—me and my friend’s partner—should go. The sellers already knew we intended to split the property between two buyers, but we reasoned that they’d instantly recognize us as two lesbian couples if all four of us attended the cookout. Our concerns were proven to be unfounded when the son and daughter of one heir arrived and were warmly welcomed by the entire family, even though the son brought his boyfriend, and the daughter brought her girlfriend. A year after the property was bought and we’d moved in, we discovered that we were known around the very small town as those women who put up board fence (because pastures around there were typically enclosed with much cheaper barbed wire), rather than those lesbians.

VK: See, that’s what I’m talking about. But back to what’s truth and what’s fiction in our books, what about that skunk story, Vaun?

Vaun: That story was based on a true event. My grandma accidentally trapped a skunk in her garden, and when she released the animal, she got sprayed. Of course, that didn’t deter my grandma from wanting my mom to drive her to the market. My mom said when they got to the grocery store, it was like the parting of the Red Sea. Every time they turned down an aisle, people scattered. Mom said her Volvo smelled like a skunk for weeks.

Jackson: It was great fun to write a pig into my story. I have a painting in my foyer that draws many compliments with no prompting. They like its Jackson Pollock style, and I like to ask, “What do you see in it?” All, without exception, point out brushstrokes they interpret as a horse or horses. They’re shocked when I tell them it was painted by a pig. I watched him compose it with astonishing deliberation while I was interviewing his owner for a feature story I was writing for the newspaper.

Vaun: In case anyone is curious, there really is a stuffed snarling bobcat mounted on the wall above the coffeepot in the general store near where my parents live in Georgia. Every time I’m in the store, I wonder what the thinking was behind the placement of that particular bit of taxidermy. Maybe he’s there to discourage too many free refills.

VK: Skunks, pigs, bobcats—we certainly cover the gamut. And just for the record, the purple cat in Take Your Time—thank you, Ma! Any more creatures we need to cover for the animal lovers?

Jackson: Yeah, a scruffy mutt with a flatulence problem, who is a drug detection canine officer, and an ape that goes rogue because she wanted to take a car ride are drawn from real-life, personal experiences. On a more serious note, my idea for the use of marijuana rather than opioids by veterans suffering PTSD came from a group of veterans’ desperate plea for the North Carolina legislature to legalize medical marijuana in this state.

Those scenarios, I’m sure, can be found all over this country, and in every state’s past. And I don’t think the South has more weird characters than anywhere else. We just like to brag about ours.

Vaun: I like to say the South has a high tolerance for eccentrics.

VK: Amen to that, Sisters.

As you read our books, Take My Hand,Take A Chance,and Take Your Time,I hope some of our sentiment comes through—the uniqueness of the South, our reverence for our upbringing, and the recognition that we still have baggage.

Enjoy the stories and the scenes that seem too wacky to be real, because most of them are! Only in the South. J 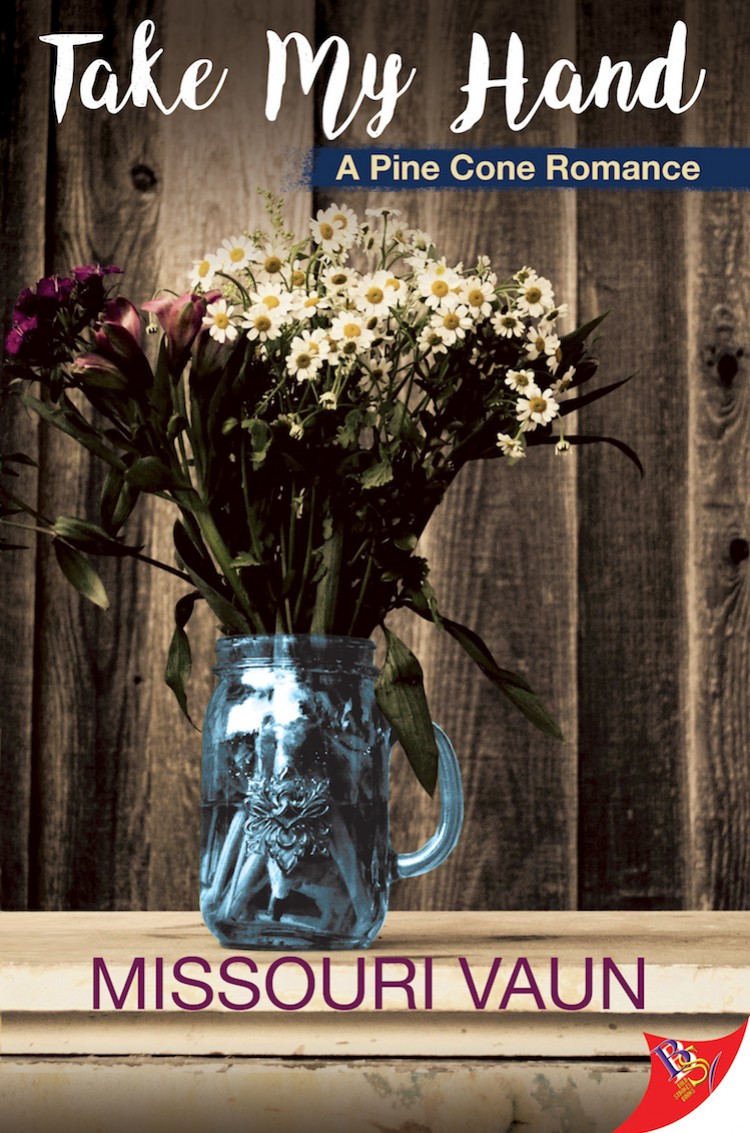 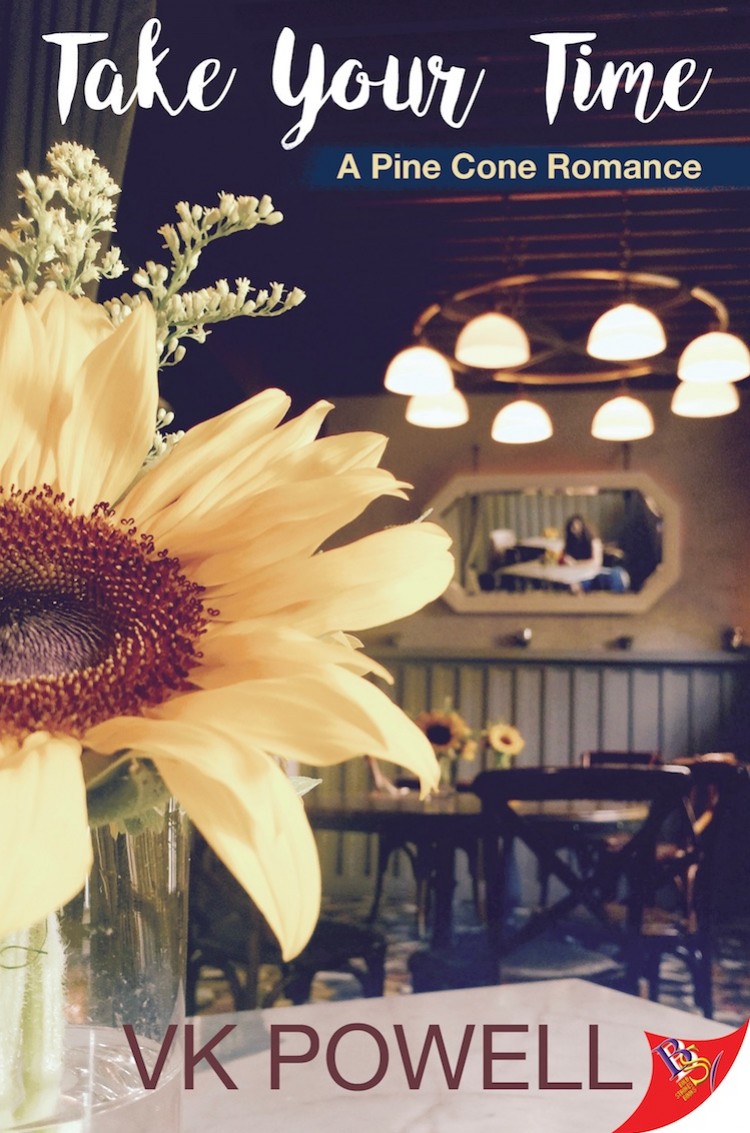 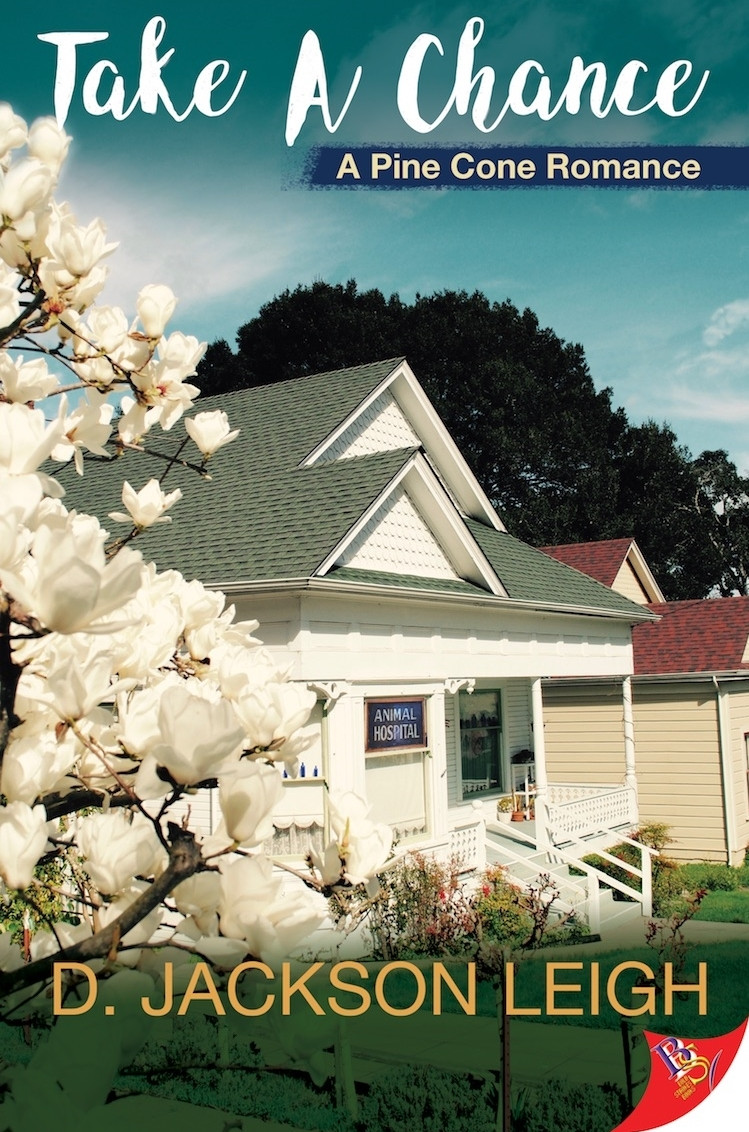